Vincent Adultman is a recurring character throughout Season 1-Season 2 of BoJack Horseman. He is first introduced in Horse Majeure, in Season 1.

He wears a long brown, double-breasted, button-down trench coat, a black undershirt, a brown fedora with a red band, blue jeans, white socks and blue sneakers with Velcro straps. His right hand is a broom and his left hand is a mannequin hand.

Vincent first appears in the episode Horse Majeure at a bar. Princess Carolyn annoyed that BoJack made her come to a bar just to come up with ideas to sabotage Diane’s wedding to Mr. Peanutbutter, walks over to Vincent and tells him to buy her a drink.

Princess Carolyn then asks his name, Vincent stutters and says “Vincent Adultman." Vincent offers Princess Carolyn a drink. When asked by Princess Carolyn to tell her more about himself, Vincent says that he likes business. While they’re talking, BoJack then walks over to them and points out that Vincent is just three little boys stacked on top of each other, under a trench coat. This makes Vincent visibly nervous. When BoJack leaves he wishes Vincent luck on his business transactions.

That same week, Vincent attends Mr. Peanutbutter and Diane’s wedding with Princess Carolyn. Vincent and Bojack finally have a one on one interaction in which BoJack asks Vincent what he has figured out that BoJack doesn’t. Vincent simply answers “adult stuff," but BoJack doubts that.

BoJack tells Vincent that he’s a really good listener and Vincent thanks him. When a dejected BoJack asks Vincent if life is just a series of closing doors, Vincent strokes BoJack’s head with the broom he uses for his right hand and tells him not to be sad, calling him a “good horsey."

In Later, Vincent accompanies Princess Carolyn to an after-party at BoJack’s restaurant following his Golden Globe victory. Vincent is brought over to BoJack by Princess Carolyn, and he asks BoJack how he is much to his annoyance. Vincent is approached by Mr. Peanutbutter who asks him how things are and Vincent tells him "[he] went to the stock market and did a business." Princess Carolyn then takes Vincent to meet Brendan Fraser.

Sometime later, Vincent is having dinner with Princess Carolyn at Elefante who tells him she wants to have fun and wears jeans, feel the grass in between her toes, and dance to which Vincent dismisses her saying that it’s baby stuff. Princess Carolyn gets mad telling Vincent that there is more to life than just work and business, going on to say that there has to be a difference between monogamy and monotony. When Vincent asks her what monogamy is, Princess Carolyn gets mad saying that they clearly have a different understanding of what their relationship is and tells him to get out of her life. Vincent agrees without argument but asks if he can have another soda first.

The following evening, Vincent shows up to Mr. Peanutbutter’s smoodie party that Princess Carolyn is attending. Vincent admits to Princess Carolyn that he had an attitude but he took a time out to think about what he did. He admits that he just wanted to be a big man but he says that the biggest thing a man could do is tell the truth. Just when BoJack thinks Vincent is about to admit to being three kids Vincent instead tells Princess Carolyn that he loves her, and they both leave the house to feel the grass in between their toes.

He and Princess Carolyn date for several episodes throughout the series, before breaking up in After the Party.

In After the Party, Princess Carolyn notices a boy who looks just like Vincent, crossing the street with his mother. Later, the boy, named Kevin, stops by her apartment and claims to be Vincent's son.

While "Kevin" steps into the bathroom, "Vincent" shows up at her apartment as well (as one would expect, the two characters are never seen at the same place, at the same time). By the end, however, Princess Carolyn breaks up with "Vincent."

He does appear again in Higher Love, but he has not been seen since.

BoJack believes that, due to Vincent's behavior and appearance, he is three children stacked on top of each other; the voiced character is Kevin. 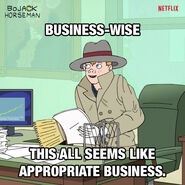 Add a photo to this gallery
Retrieved from "https://bojackhorseman.fandom.com/wiki/Vincent_Adultman?oldid=55105"
Community content is available under CC-BY-SA unless otherwise noted.