"The View from Halfway Down" (In Dream)

Herb Kazzaz was the creator of Horsin' Around and a recurring character in BoJack Horseman. His first appearance was in Zoës and Zeldas, in Season 1.

Herb was an overweight human man with brown hair.

In the 1980s, he had shaggy hair and a beard and mustache. He wore an open green and orange plaid sport coat over a black shirt, green jeans, and dark blue, light blue, and white sneakers.

In the 1990s, Herb's hairline had receded. He was also a bit heavier. He wore a grey collared shirt with flowers on it, tan khakis, and light grey and green sneakers.

After getting cancer, Herb was very skinny and had lost all of his hair due to cancer treatments. He wore a long-sleeved medium blue shirt, grey sweatpants, and white slippers. He also has an IV hooked up to his left arm.

In the days of Horsin' Around, Herb appeared to be a friendly, upbeat, and supportive person who did believe in everyone on board and did care for them.

He was fired from the show after he was involved in a public scandal and was revealed to be gay. BoJack had to stay on the show, figuring that he would be satisfying the millions of people watching. It didn't work out years later for BoJack since Herb felt it was a betrayal.

While Herb's personality hasn't changed drastically, he has grown deeply bitter towards BoJack. When BoJack comes to visit him, he keeps making jokes about how he stabbed him in the back.

He at first says that despite what happened in the past, it was nice to see him again. Unfortunately, when BoJack comes back to apologize, he is not giving BoJack any sympathy or sense of closure. He understandably says that the scars BoJack made were too deep to make better with an apology.

Herb Kazzaz was BoJack's former best friend and mentor, as well as an experienced comedian, who created and wrote Horsin' Around.

Herb was a stand-up comedian in the 1980s who would often perform at a bar in Los Angeles. He met a young comedian named BoJack Horseman while heckling him as he performed. He approached BoJack in the bar, who was initially upset and told him to "Get cancer, jerkwad."

This foreshadows Herb's rectal cancer later in life. Herb gave BoJack comedic advice, and the two became best friends. They both worked at the bar and performed together. Herb began dating a young doe named Charlotte Moore, whom BoJack also became close with.

In 1986, Herb pitched network executives his show Horsin' Around. Around the same time, Charlotte left for Maine, breaking up with Herb before this. She revealed this news to BoJack, saying she doesn't think she is the person that Herb is looking for.

The network picked up Horsin' Around, and Herb wanted BoJack to be the star of the show, an offer which BoJack accepted. Excited, Herb kissed BoJack, but they both clarified they weren't gay. Herb also gave BoJack a telescope.

The show went into production and premiered in 1987. It was initially dismissed as mediocre, but it gained a popular audience and was a huge success.

In the early 1990s, Herb was caught having sexual relations with another male. He was widely criticized by the media, who then attempted to boycott Horsin' Around. Herb was worried about being fired and admitted his homosexuality to BoJack, and asked him, as a friend, to threaten to leave if he was fired. BoJack was unsure at first but decided to help Herb because Herb was responsible for his fame in the first place.

However, Angela Diaz convinced BoJack that Herb would understand if he really was his friend and that if BoJack did leave, he wouldn't be the star he dreamed of being. BoJack stayed on the show until its cancellation in 1996, not only betraying Herb but also cutting off contact with him entirely.

Herb was understandably upset, keeping in touch with Joelle and Sarah Lynn but never speaking to BoJack for twenty years after. He did many things in that time, including opening a charity and meeting president Bill Clinton. He even kept in touch with Charlotte. During the 2000s, he was diagnosed with rectal cancer.

In 2014, BoJack decided to speak to Herb after learning from Sarah Lynn that he had “ass cancer." BoJack later gets a phone call from Herb, angrily saying to come to Malibu, where he lives, because he'll be alive tomorrow, and that "after that, who knows."

BoJack travels to Malibu, California with Diane Nguyen, who was writing his biography. Todd Chavez also came along but didn't meet Herb because he was left to park the car and ended up in a subplot with two girls, referring to themselves as the Celebrity Stealing Club, who were stealing from celebrities.

Herb is actually somewhat glad to see his old friend, but understandably is still angry and took several jabs at BoJack, making "jokes" about BoJack stabbing him in the back all those years ago. BoJack later apologizes to Herb for what he did.

Herb doesn't forgive BoJack and goes on a rant about how BoJack has to live with what he did. Herb was mad, not because BoJack didn't leave the show, but because BoJack completely abandoned him, and he would never forgive him for that. He then commanded BoJack to "Get the fuck out of [his] house."

BoJack walks out, picking up the telescope Herb kept. Herb gets mad and attacks BoJack, ending up wrestling on the ground with him. The telescope ends up broken, a possible further symbol for the damaged friendship.

Herb then states, "You know what your problem is? You wanna think of yourself as the good guy. Well, I know you better than anyone else and I can tell you, that you're not. In fact, you'd probably sleep a lot better at night if you just admitted to yourself that you're a selfish goddamn coward, who takes whatever he wants, and doesn't give a shit about who he hurts. That's you. That's BoJack Horseman." BoJack claims he doesn't know why he came there, to which Herb replies "Yeah, you do."

In 2015, Herb overcomes his cancer but is killed soon after in a car accident. He didn't sustain injuries from the accident itself but had crashed into a truck filled with peanuts to which he was deathly allergic.

Henry gives Princess Carolyn Herb's ashes. Meanwhile, BoJack, Bradley, Sarah Lynn, and Joelle reconnect. They were all annoyed with one another, but when it is revealed Herb was writing a manuscript for a novel, they agree to look for it.

They eventually found out that Henry Winkler took it, not by any malicious intent, but simply because it was a horrible manuscript. He was hiding it because he didn't want Herb to become a laughingstock. As a way to be respectful to Herb's legacy, they agreed not to publish the book.

In The Showstopper, Herb appears during BoJack's drug-induced dream in the musical number Don't Stop Dancing 'Til The Curtains Fall, which is sung by Gina Cazador.

In Sunk Cost and All That, one of the entries BoJack wrote on the whiteboard in reference to his past bad deeds was "Abandoned/wrestled Herb."

In Xerox of a Xerox, BoJack drives until he reaches The Laugh Shack. He walks up to a wall by the dumpster and sees an outline of his younger self drawn on the wall. When he steps inside of the outline, the scene flashes back to a younger Herb and BoJack back in the 80s. Herb is tracing an outline of BoJack while he stands by the wall. BoJack states he is ready to never do stand up comedy again and asks Herb if he'll put BoJack in his TV show. Herb reassures him that of course, he would, the network loves BoJack.

Herb goes on to tell him the network needs BoJack to do a screen test as a formality. BoJack questions why he has to do it and Herb asks if he thinks he's too good for it. BoJack says it's fine. Herb then tells BoJack to hold still so he can finish drawing the outline. He says BoJack may never get a star on the walk of fame or a wax statue, but this way, he'll be immortalized forever.

In Angela, there is a flashback from the 90s. Angela meets with Herb and tells him they are trying to sell the network to Disney. Herb then asks if Michael Eisner really cares about who he goes to bed with. Angela then tells him "We don't need to bring Eisner into this. Obviously, Michael Eisner is a compassionate and progressive individual. This isn't about him." Herb then tells Angela to tell him "you're fired" if he's fired. Angela then says Herb is fired, and that all they need is The Horse. Herb replies by saying if Angela wants BoJack to betray him, she's going to need a good pitch. Angela then says okay to this.

In The View from Halfway Down, BoJack has a dream he is at a dinner party. In the living room, the other dinner party guests are other people who have predeceased BoJack: Herb Kazzaz, Sarah Lynn, Zach Braff, Corduroy Jackson Jackson, Crackerjack Sugarman, and Beatrice Horseman.

Herb during the successful run of Horsin' Around 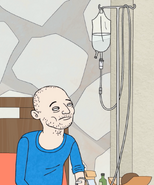 A terminally ill, cancer-stricken Herb
Add a photo to this gallery
Retrieved from "https://bojackhorseman.fandom.com/wiki/Herb_Kazzaz?oldid=56494"
Community content is available under CC-BY-SA unless otherwise noted.