Chickens
Becca is a one-time character in BoJack Horseman. She is a broiler chicken destined for consumption that escaped and whom Todd Chavez tried to rescue in Chickens.

Becca has no notable emotions, as she was induced with hormones at a young age, and raised for the sole purpose of being eaten.

One emotion she is confirmed to have is fear, as she became panicked at the sight of blood, and mounted chicken-heads in the Gentle Farms slaughterhouse. Todd was apparently able to calm her.

Becca and the other food-chickens also appeared to experience fear, when they were woken up by the sound of gunshots, during Todd's break-in.

However, in Chickens, Becca is able to compassionately pronounce Todd's name properly. This suggests she has some semblance of real emotions, and the ability to sentimentally make emotional connections.

She speaks almost entirely through clucking, specifically variations of the stereotypical "bock" sound. This works as part of the episode's humor, as her "bocking" is interpreted as actual speech through word-play.

In Chickens, after a Chicken-4-Dayz transport truck crashes in a traffic jam BoJack caused, Becca escapes and roams around the city until coming upon Mr. Peanutbutter's house where Todd is lingering.

Seeing her as an adventure for the day, Todd disguises Becca in human clothes and enlists Diane and Irving to help him get Becca out of the city.

En route to an undetermined location, Irving Jannings suggests they take Becca to Gentle Farms, where they decide she'll be treated better than she would have at Chicken-4-Dayz.

Against the better judgment of Todd, Becca is nonetheless forcibly taken in by the owner of Gentle Farms.

After Todd convinces Diane to help, they and Irving return to Gentle Farms to break Becca out. In the process, Diane and Todd release all the imprisoned chickens residing there, after realizing, "...they're all Becca."

They escape with Becca, only to be caught by the police and taken to the station. BoJack uses his stardom and influence to clear all charges, and Becca is adopted by Drew Barrymore (who previously owed BoJack a favor for ambiguous reasons). 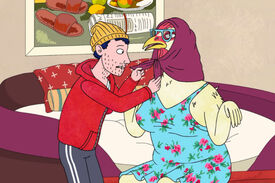 Todd disguises Becca in a scarf and sunglasses. 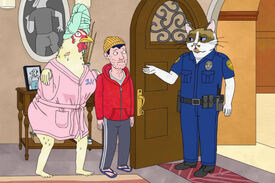